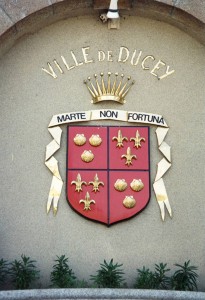 To search and discover links between the first set of Norman families who ruled the fief of Ducey lands between 1100 A.D. to 1220 A.D. at the town of Ducey, France, and the subsequent migration of Ducyes, Ducies and Duceys to England, Ireland and elsewhere. It is not a family history designed to directly connect these early families with the many thousands of Duceys around the world today .

This website builds on the book The Ducey Story and some Allied Families written and published by Sister Agnes Cecelia Ducey, in 1966, a member of the Religious Order of the Sacred Heart, then living in Omaha, Nebraska. Researched and written well before the internet age, she used personal contacts and the mails to access historical sources in France, England, Ireland and North America. Her facts and conclusions, have been re- checked and verified where possible with other sources now more freely available. Overall, the facts she uncovered were largely correct. In a very few cases, some important conclusions have been found to be more in the realm of supposition, perhaps because further information was unobtainable at the time she was writing.

However, despite the amount of new information that has become accessible since introduction of the Internet, some key facts still remain to be further developed.

a) very early origins of the Ducey name and the town of Ducey in Normandy;

b) more background about the first identified seigneur of Ducey, Ranulfuum de Dusseio and his immediate successors;

c)-movements of his descendants from Ducey to elsewhere in France after 1300, particularly the date and identity of the Ducey knight who is said to have sailed to England in 1326, and

d) who were the first Duceys to move to Ireland, and did they come from England or direct from Normandy?

So, consider the following as a gathering together of information about the Ducey family, as summarized in December 2012. Much work remains to be done and we hope you can help.

I would like to thank the following people for their support and assistance with this project: the late Gerry Ducey, Cupertino, CA; Jack Ducey, Jacksonville, OR; Marty Krauter, Beaverton, OR; and Krista Ducey, Kelowna, BC, whose firm, Lynks Web Services, has put together this website. My name is Brant Ducey, and I live in Kelowna, British Columbia, Canada. This is my first attempt at genealogy and after a year of work, it my be my last! I have a BA and an MA in Journalism from the University of Oregon and am retired after a career in corporate communications. I can be reached at brantducey@gmail.com

6.2 Internet Search of Ducies/Ducyes/Duceys in England.

7 – How did the Duceys get to Ireland?

7.1 Searching for early Duceys in Ireland.