My translation of Mme. Houlbert’s section on the early history of Ducey and its first family of seigneurs is contained in the appendix on this website.  Despite additional searching, we have very little in the way of a complete story of those early Ducey land-holders.  They weave in and out of sporadic references in medieval Norman history.  There is, as yet, no clear evidence as to when they left Ducey and exactly where they went, let alone how they got there in the first place!

Most of the earliest information comes mainly from a few sets of historical collections and writing published in France between 1831 and 1910.   These histories are largely based on Latin manuscripts, which fortunately survived the many centuries of warfare, famine, plague and decimation. However to get a mention in such records, one normally had to be a member of royalty, a famous warrior or a noted politician.  A researcher still must be careful of who was writing what in the 19th and early 20th centuries.  The Abbé Desroches, writing in 1856, spends a great deal of time trashing the works of Edouard LeHericher, over factual errors made by his predecessor some two decades earlier.

These histories and others tell us that the first known seigneur,of the area of Ducey, was a knight, Ranulfe or Ranulf (in Latin: “Ranulfum de Dusseio”), who lived there about 1095 to 1140 A.D.  Both England and France were ruled by King Henry I from 1100 to 1135 and Ranulfe is first identified as being in the presence of Henry I at the Council of Rouen on 7 October 1118.  Historian LeHericher writes that he was a warrior with William the Conqueror on his invasion of England in 1066.  But no link to his name has yet been found among the existing lists of the leaders of the estimated 7,000-10,000 invaders who crossed the English Channel.  However, in that list is “Duciiesene,” which could be a reference to warriors from Ducey, or more probable, a version of the Duchene family listing.

Ranulfe, like other knights who provided some kind of military service to the Kings of France, either inherited or was given the Ducey lands to own and to rule, while remaining faithful to the monarchy.  His land, or “fiefdom,” was relatively small and centered at Ducey, on the Sélune River, within easy riding distance of Mont Saint-Michel and several nearby towns .  He became known as “Ranulfe de Ducey” (Ranulfe of, or from, Ducey).  Research of original maps dated about 1198 led Sister Agnes to write that  the Ducey fief was about 15 miles wide and  just over 20 mi. deep, with three centers at the north end, (Champcervon, St. Martin-le-Bouillant and Le Gast) and the parishes of Ducey and Juilley near the south end.

Sometime between 1118 and 1128, Ranulfe is recorded as present when his son, Robertus de Duxeio(1), praises his father while pledging the support of some of the lands in his fiefdom of Ducey to the Abbey at Mont Saint-Michel. Robert was accompanied by his wife, Cecile and his first son,William(1).  Records say they later had a second son, Robert(2) and a daughter, Mathilde, but she is sometimes confused with another Mathilde, who is generally acknowledged to have been the daughter of Robert(2).

The most celebrated of the Ducey seigneurs was Robert’s elder son William(1), recorded as holding the title from 1171 to 1180.  However the question remains, if William was born just before 1118, but listed as seigneur so briefly, who was in charge of Ducey from the time of his father Robert’s death, said to have occurred by 1140?  It is a gap typical of the early records we have to work from.  One concludes that William must have been in charge of the Ducey fief for much longer than the period 1171 – 1180. 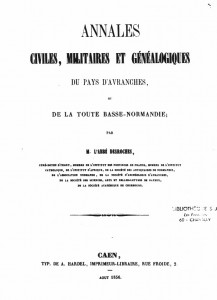 This William is recorded as pledging many gifts to several churches in the Avranches area.  Although dying at his chateau in Ducey in 1180, he is said, by choice, to have been buried at the abbey of Savigny.  One source said he died without any descendants.   However, it then goes on to cite Hervé de Ducey as seigneur de Ducey from 1180 to 1220.  Sister Agnes identifies Hervé as his eldest son, and he appears on the Tax Rolls of Normandy in 1198, along with siblings Aeliz, Gisleberte and Ernalde.  Another source says Hervé had one daughter, Mathilde, (sometimes referred to as Maud), born about 1164, and that it was she who married Count Nele de Mortain about 1185.

Despite the claimed longevity of Hervé’s reign at Ducey, also cited by Valérie Houlbert, I have been unable to find any further historical references to Hervé.  From this point on, the Ducey family history get murky, with contrasting stories about who, if anyone, may have succeeded him.

Nor can we conclude there was a smooth succession of Ducey seigneurs from the time Hervé’s reign is said to end in 1220, until another of them is said to have sailed to England in support of Queen Isabella in 1326.  Evidence suggests there was more than one seigneur of Ducey at the same time during  certain periods.

Here are some additional items from records accessed by Sister Agnes Ducey:

Thus it could be two grandsons of Hugh –a William and a Johanne – who were in place in Normandy about 1326.  A descendant of Johanne de Ducey is said to be Olivery de Ducey who held lands at Ducy, Ste. Marguerite, circa 1400 – 1415.  He is listed as slain at the Battle of Agincourt in 1415, by the invading forces of King Henry V of England.   Ducey families in France today, are believed to be descendants of the earlier John de Ducey and/or Olivery de Ducey.  However  it remains possible that some of them may be descended from any of the various William de Ducey lines.

It is generally agreed  in local Ducey histories that through the marriage of Mathilde, daughter of Robert(2), the Ducey fief at Ducey, passed from the Duceys into the Husson family, who became seigneurs of Ducey in 1302.