Thoughts about the name “Ducey” 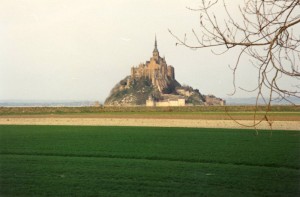 There is no definitive conclusion about the origin of the name Ducey but there are two major, differing opinions:

One has been handed down  by successive parish priests who served as local historians for the town of Ducey.  It suggests the name is Celtic in origin, dating back before pre-Christian years and that it comes from a translation that described “a village near a river,” (in this case the Selune River), or a location “on a hill near the water.”

The other opinion is that the name has Gallic-Roman roots, dating back to Roman times.  One version is that it comes from ‘DUXEIO,’ a reference to a roman  law of 129 A.D.   Another version of the Roman theory is that the name came from either DUSSEIO,  DUSSIUS or DUSSEUM, successive versions of the name.  Duxxeio comes from Latin roots  dux, ducis, meaning leader, guide, commander, general, duke, etc. However this leaves open the possibility that if true, there might have been several other variations of the name elsewhere.

This lack of clarity can be seen in a survey of Norman place names written by P. Chesnel in which he credits it to be of Latin origin, possibly coming from Duclus, ( aquarium), and then mentions Duxeius, generally accepted as the common Latin root which led to the French version, Ducey.  Alas, unlike most of his other more detailed citations, he then drops the matter, stating “However a proper name is possible.”

Whatever the origin, the name eventually became attached to the first known of the Ducey seigneurs, or land-holders, who were gifted control of the territory for prior military service.  The first identified seigneur is recorded to be Ranulfe, a descendant of a Viking warrior, who was awarded fiefdom of Ducey lands sometime after the Norman invasion of England in 1066.  Originally referred to in Latin as Ranulfum de Dusseio, Norman historians refer to him as “Ranulfe de Ducey” (Ranulfe of/from Ducey).

For now, we leave it for you to decide if he was “Ranulfe”from the village near the water,” or Ranulfe “the leader.”

The first written reference to a ‘Ducey family’ member identifies his son, Roberti de Duxeio, who, about 1128 A.D.  signed a charter pledging a gift of lands at Fougeres to the Chapel of St. Michael at the Abbey of Mont-Saint-Michel.  This was a common act of wealthy landholders who did so  in return for eternal religious blessings.

Here are Sister Agnes Ducey’s 1966 thoughts about the family name:

…”According to the best authorities, the name is of very ancient Celtic, or pre-Celtic origin, going back to perhaps 1500 years before the Christian era.  The first syllable “du” signifies water, or something connected with water, in all countries that were at one time the home of the wondering Celts.  The suffix “cu” of “cey” indicates an inhabited place.  Briefly, Ducey means a village near a river.    It really has no connection either with the French word ‘douce’ (sweet), nor with the Latin word ‘ducis” (leader, possessive form), although it has sometimes been thus translated into other languages.  The spelling “cey” is characteristic of the names of towns in southern Normandy, for instance: Marcey, Dragey, Chalandrey, Brecey,etc.  Further north, this ending is usually spelled without the “e”, as: Tessy, Percy, Cerisy, Marigny, Pontfarcy, Courcy, etc.

“Now as to the variations in the spelling of the name; when you have never seen a word written and are obliged to spell it, you spell it phonetically, don’t you?  And as there are variations in pronunciations, so there will be variations in the phonetic spelling of the same word, even among well-educated people.  During the lifetime of Sir Walter Raleigh, his name was spelled in seventy different ways by his friends and his enemies.  He, himself, spelled it in three different ways, his preference being for “Ralegh,’ during the last days of his life.

” …In Normandy, then, we have found five forms of the name: Ducey, Duce, Ducy, Dussy and Douzy.  In England we find Ducye, Ducy, and Ducie.   In Ireland, Dowse, Ducey and then,  in the 19th Century, but not earlier, appear the two forms: Ducie and Doocey.  The statement of Rev. P. Woulfe, in Irish Names and Surnames, to the effect that Ducey is an anglicized form of the Gaelic “Odubhghusa,” is simply not supported by any relevant facts, and is therefore, in my opinion, untenable.  On the other hand, much documentary evidence supports our thesis as to the origin of the name Ducey.”

The opinion on the Celtic roots of the name (“on a hill near water”) cited by Sister Agnes was also favored by an earlier parish priest of Ducey, Edmond Bernard, cure of Ducey during the time she was writing  in the 1950-60s.

Here is a translation of what author Valérie Houlbert has written in her history, Ducey, the research of its past , with respect to the name Ducey:

Mme. Houlbert ‘s source for the Latin origin is provided in two footnotes:

A further possible source in France that I have been unable to access is by Roger Lepelley, 1963, Dictionnaire etymologique des noms de communes de Normandie.

Finally, it should be noted that Sister Agnes pointed out in her introduction, that there is in North America a branch of Duceys which is not related to the French/English/Irish Duceys.  These families descend from a group who came from Lithuania after WW I and took the name Ducey after arrival in North America.