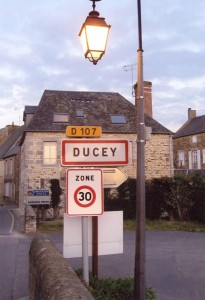 This project has taken shape over a year of research and writing, but it remains frustratingly incomplete.  Very little new information has been uncovered to flesh out the successors of the early ‘Seigneurs de Ducey,’ from the period 1120 – 1330 and later.  We hope that our French cousins will continue to search for this information.  We remain unable to identify the Ducey knight who sailed from Normandy in 1326 in support of Queen Isabella, and to find exactly where in Staffordshire he was given land for his services.  A 75 year – or two generation gap - remains between his arrival and when the name Roger Ducie is found at Walsall in 1401. Another 125 years pass before we find Henry(1) Ducye and family at Willenhall.  As well, once the sons of Sir Robert Ducie died “without issue,” no work has yet been done to trace the many descendants of other English Ducies who were living in the 1600s

Nor have we been able to identify who may have been the first Ducie or Ducey to arrive in Ireland.  Was it an English Ducie or Ducey in the early 1600s?  Or could it have been a Ducey who arrived with Norman invaders on the south coast of Ireland at Wexford in 1169 and again at Waterford in 1171?  The fact that most Irish Duceys seem to have descended from subjugated tenant farmers in southern Ireland , rather than from an English ancestor of privilege, such as the mysterious ex-archdeacon of the Church of Ireland, at Ardfert in 1625, means that an early Norman connection cannot be ruled out.

Moreover, given the lack of early legal records available, it is remains difficult to develop any semblance of family succession among the various Ducey families identified in southern Ireland between 1783 to 1850.

However our efforts at trying to trace Ducey ancestors from Ducey, France to North America end here, for now.  But the objective remains unfinished.

We hope that someone will be able to answer the key questions  above.  The gate has also been opened wider for those who wish to trace their own family histories from Ireland, as well as in France and in England.  However the numbers involved to trace them altogether here would be a massive and lengthier task than time permits.

We leave you hopefully knowing a bit more about the Ducey family.  It is not a large family in the scheme of genealogy but it can boast nine centuries of history and survival through incessant wars, famines and migration.  If nothing else, Duceys are survivors!

Meanwhile, we hope that this project will be of some assistance if you decide to search further.   If so, we wish you well with your individual family projects.  And if you can find any further clues to our missing links between France, England, Ireland and North America, we hope to hear from you!